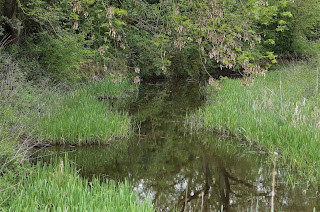 Avon Wetlands NR at Pershore was already a known site for this species, having being recorded from both leaf mines and a confirmed adult to light on 22nd May 2015. Patrick and myself were keen to see adults ourselves so we visited the site on 3rd May this year. Patrick soon found several occupied mines on Glyceria maxima leaves. Later two larvae and two pupa all beneath spun tents of silk were also found. What were presumed to be parasitized pupae were seen. The long mines are quite characteristic starting back from the apex of the leaf and heading down towards stem just above water level. The pupa were stored in situ on sections of leaf in clear containers containing some damp tissue to prevent drying out. A 'larger' adult female emerged on the 13th, followed by a smaller male on the 14th May. Patrick also had a male emerge on the 14th. I returned my two back to the site for a successful release on 17th May. There was quite a size difference in the sexes and the female had whiter more obvious marks across the forewing. In the meantime Patrick also visited Leasowes Park, Halesowen where in similar habitat on the canal he found some mines but no pupae.
Images: The mines and habitat are Leasowes Park, the larva pupa and imago from Pershore.
Patrick Clement and Steve Whitehouse 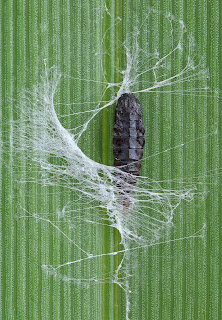 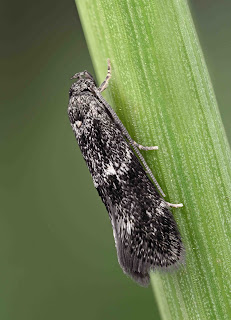 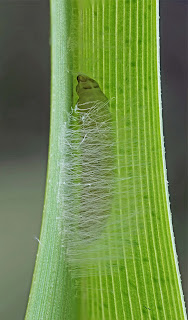 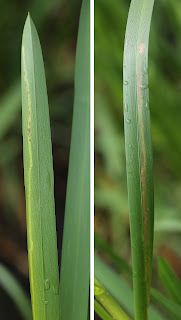 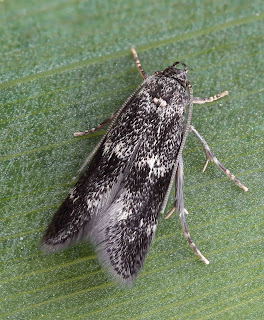 Posted by Steve Whitehouse at 08:55