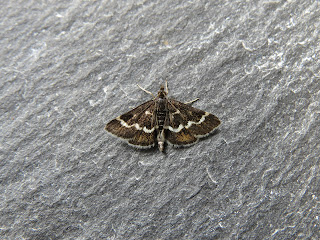 This active little moth, Pyrausta nigrata, was flying around my actinic light this morning at Norchard, Worcs. Probably the first VC37 record since Bredon Hill in 1899.
Posted by Mike Southall at 16:45 2 comments:

This 4 spot came into my trap at Whitchurch on Wednesday night, (6th VC record). This was sort of on my radar as there have been 3 reports from Tintern this month which is about 10 miles South as the moth flies. It may be spreading into our area up the Wye Valley. Otherwise a pretty good night with 96 confirmed species and some micros TBC.
John 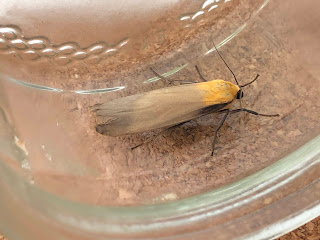 Alan Prior does it again in his Hall Green garden.

"After suffering the worst July ever for recording garden moths, I arrived home from a fairly epic moth night at 5 am this morning and found a very lost moth in the garden trap.  A species I'd never heard of, let alone seen, from the rocky shorelines of the south and west!  A Crescent Dart.  Thought it worthy of sticking on the blog, as it may be a first for VC 37."

Unsurprisingly, it is a first for Worcestershire VC.

Posted by Patrick Clement at 07:30 No comments:

I've been trying to get out moth recording for a while, but keep getting thwaretd by poor night-time weather. However last night I decided to head out to the Mortimer Forest and took the car down to Mary Knoll Valley and ran 2 Robinsons for 3 hours and packed up just as the rain arrived, so perfect timing. 96 species so far and with a few pugs and surprisingly few micros to identify later, the list will just creep above 100 species. Top for numbers was Buff Footman with 265 counted, but there were good numbers of quite a few species. Still recording Satin Lutestring (15), then Cloaked Carpet (4), Scalloped Hook-tip (2) and Barred Rivulet (2) were nice to see, otherwise the usual species you'd expect just about anywhere. Conspicuous by their absence - no Hoplodrinas and no Common Rustic. List below. Peter Hall