Busy night in the trap last weekend and finally managed to identify most of them .. with help from PH - thank you. Heart's and Dart's seem to have got the message about social gatherings outdoors and limited their numbers to 30 ... thank goodness! Some nice surprises that I haven't seen for a while including Poplar Grey, Dark Arches and Ghost moth. Also spotted a Beautiful Knot Horn on the moth trap cable .. almost missed it as I was putting away the trap. 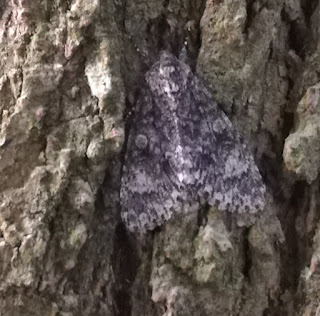 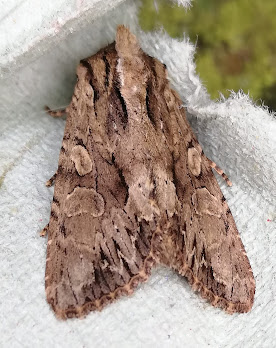 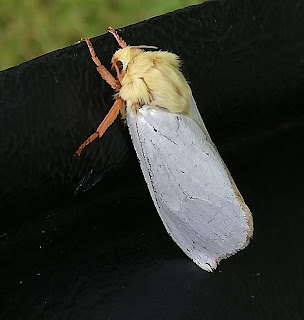 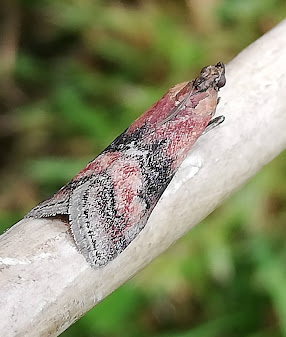 Posted by Theresa de la Fuente at 18:55 No comments:

For those of you that have selected to receive a notification of a blog, this service is apparently stopping soon, so you will have to rely on memory to look at the website in future. A bit disappointing and those of you who are very astute will have noticed that the option to receive e-mail notifications has also gone from the main page. Peter Hall
Posted by Peter Hall at 11:30 No comments:

Four mv traps were run on Sunday night (13th) in the northern section of Wigmore Rolls on a very mild night and finally a more busy evening resulted. At the moment there are 140 species recorded with around another 20 species or so still to add once identified. I think the best record will be Ancylis upupana, the 4th county record, but also Epinotia tetraquetrana was a nice one too. Macros included plenty of LittleThorn, Satin Lutestring, Figure of 80 and Beautiful Snout. Peter Hall with Dave Wilton

From DW:  "It was great to have a change of scenery from my native Buckinghamshire, with what was probably the best trapping result of the year for me with quite a few moths that we don't get 'down south'.  It was very nice to see so many Beautiful Snouts (quite a rare moth in VC24) and Satin Lutestrings (only one Bucks record and that was probably a vagrant), while Little Thorn and Alder Kitten were bonuses that we don't get at all.  One Blomer's Rivulet turned up too, a moth which now seems to be extinct in Bucks.  We didn't see Lunar Thorn which Peter had at Wigmore a week earlier and that's another moth which has disappeared down our way.  The tiny but beautifully marked Micropterix aureatella was my favourite amongst the micros, appearing at each of the traps at Wigmore but for which there are only two records for VC24.  I'd never seen it before."

Despite the moth being worn and loosing its white palps this looks good for Phtheocroa schreibersiana from my garden Robbo in Warndon overnight. Already established itself in Swindon area since 2017 and thought to be spreading in new urban areas via planting of trees on new housing estates and we all know there's plenty of them round here!! A busy night for micros with a Crassa tinctella and 2 Bryotropha basaltinellas as supporting cast 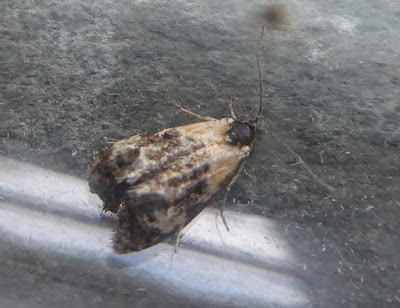 Macro highlight was only my second Light Brocade (after one on 22nd June 2013)
Posted by Steve Whitehouse at 18:48 1 comment:

My first visit to Birches Farm for moth recording took place on the 9th. A warm and humid night, but the slow-ness of the season was still apparent with just 54 species from 2 Robinsons operated for my standard 3 hour period. I have maybe another half dozen (mostly micros) still to identify later, so around 60 species and when combined with another trap operated by Sarah Cadwallader and David Griffiths nearby, the grand total will approach 70. For me, there was a first and I was delighted to record Wood Carpet. Only 1 or 2 records for Herefordshire per year for this one. Peter Hall

Following the success with the Red-tipped Clearwing on the 7th I thought I'd give another lure a try.
With all the reports of Red-belted on the Facebook Moth groups this seemed the logical choice so I deployed the MYO lure
I had success within the first hour of the lure being out however it promptly escaped when I opened the trap to attempt a photo.  I then left it out and had another (or the same one) within the next hour.
That's the MYO lure back in the freezer until next year
Will try for Currant Clearwing with the TIP lure over the weekend as this is a species that has eluded me.  Will also chance it with CUL for Large Red-belted Clearwing; you don't try, you don't get...
Lee 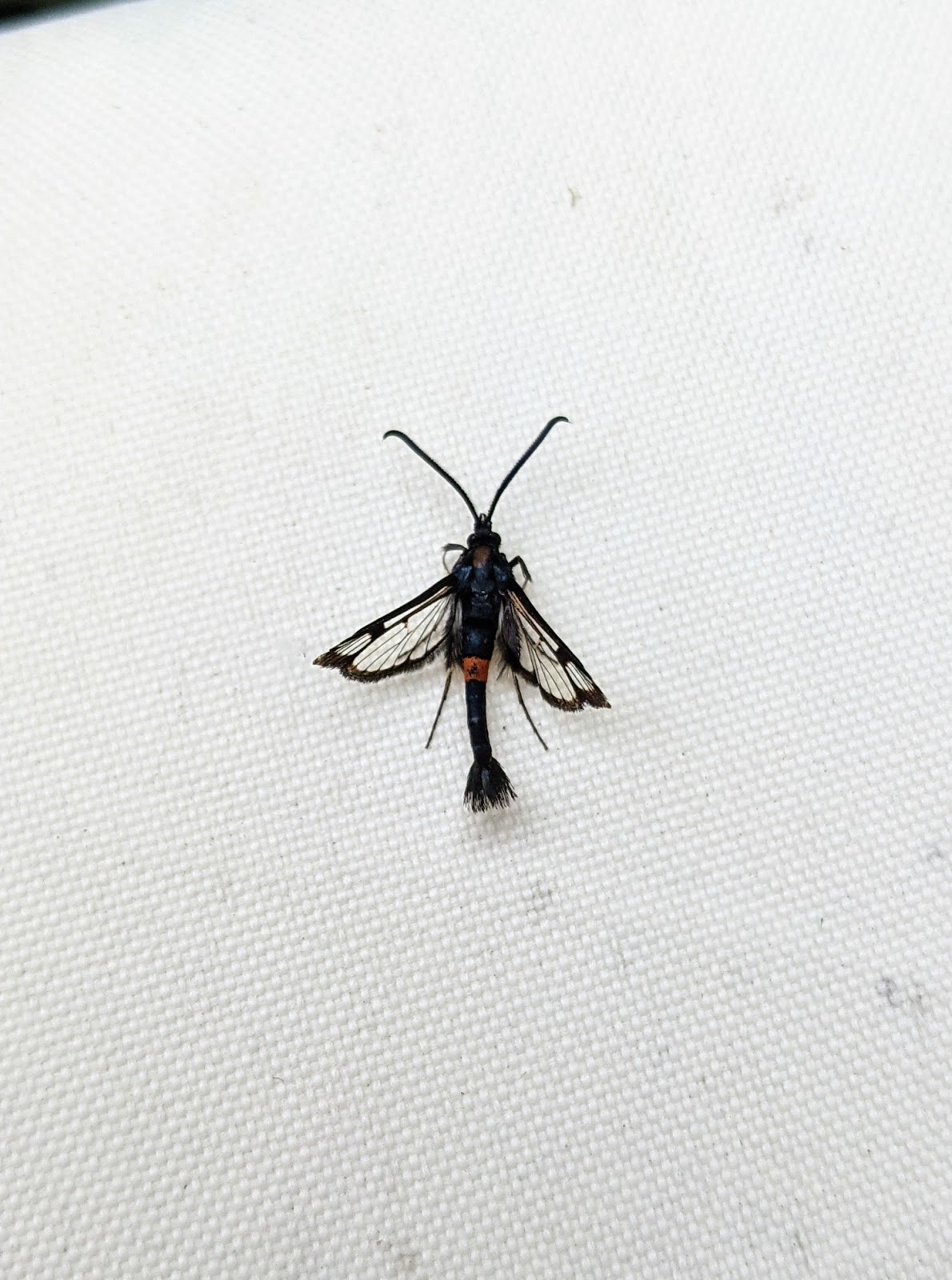 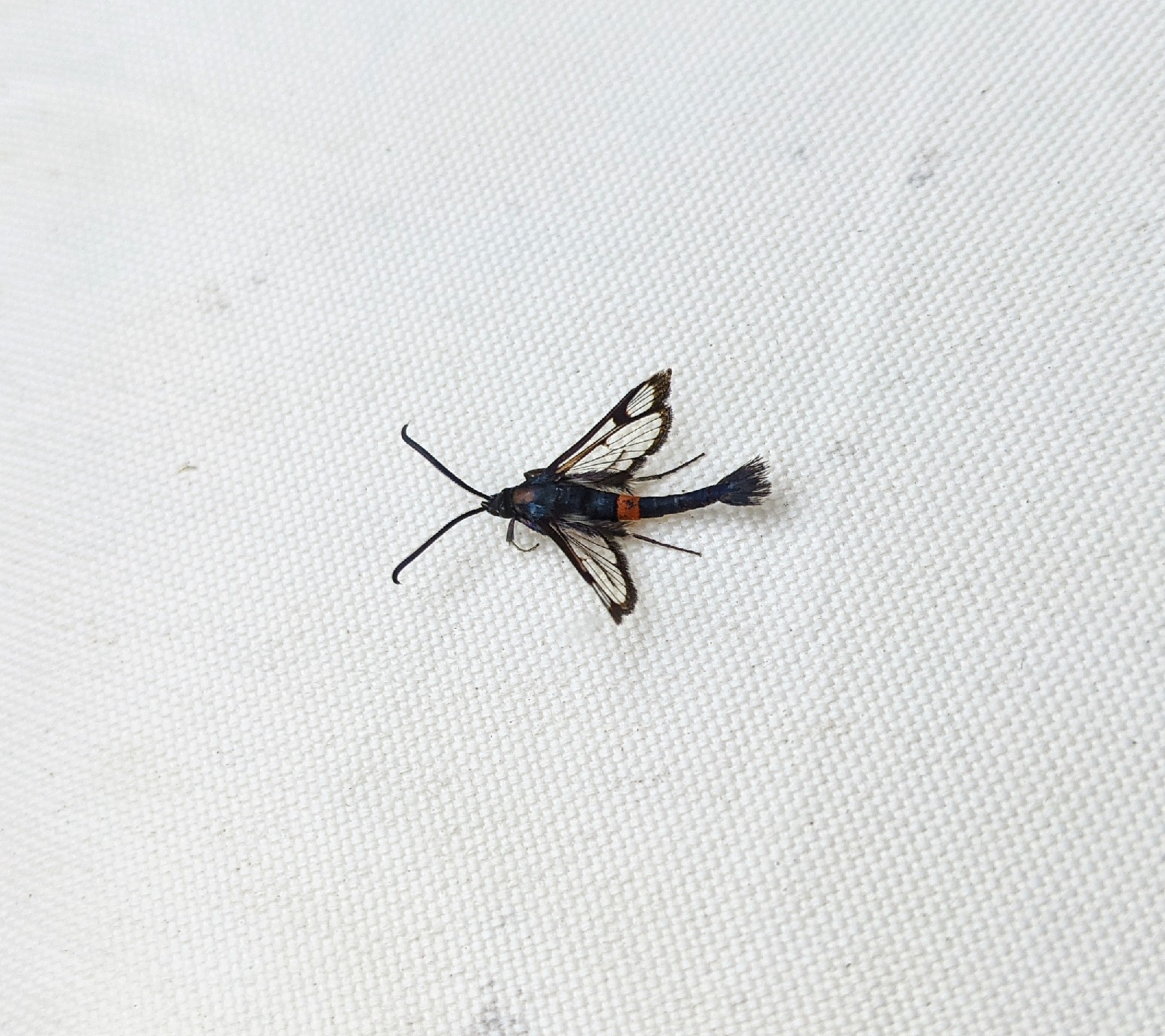 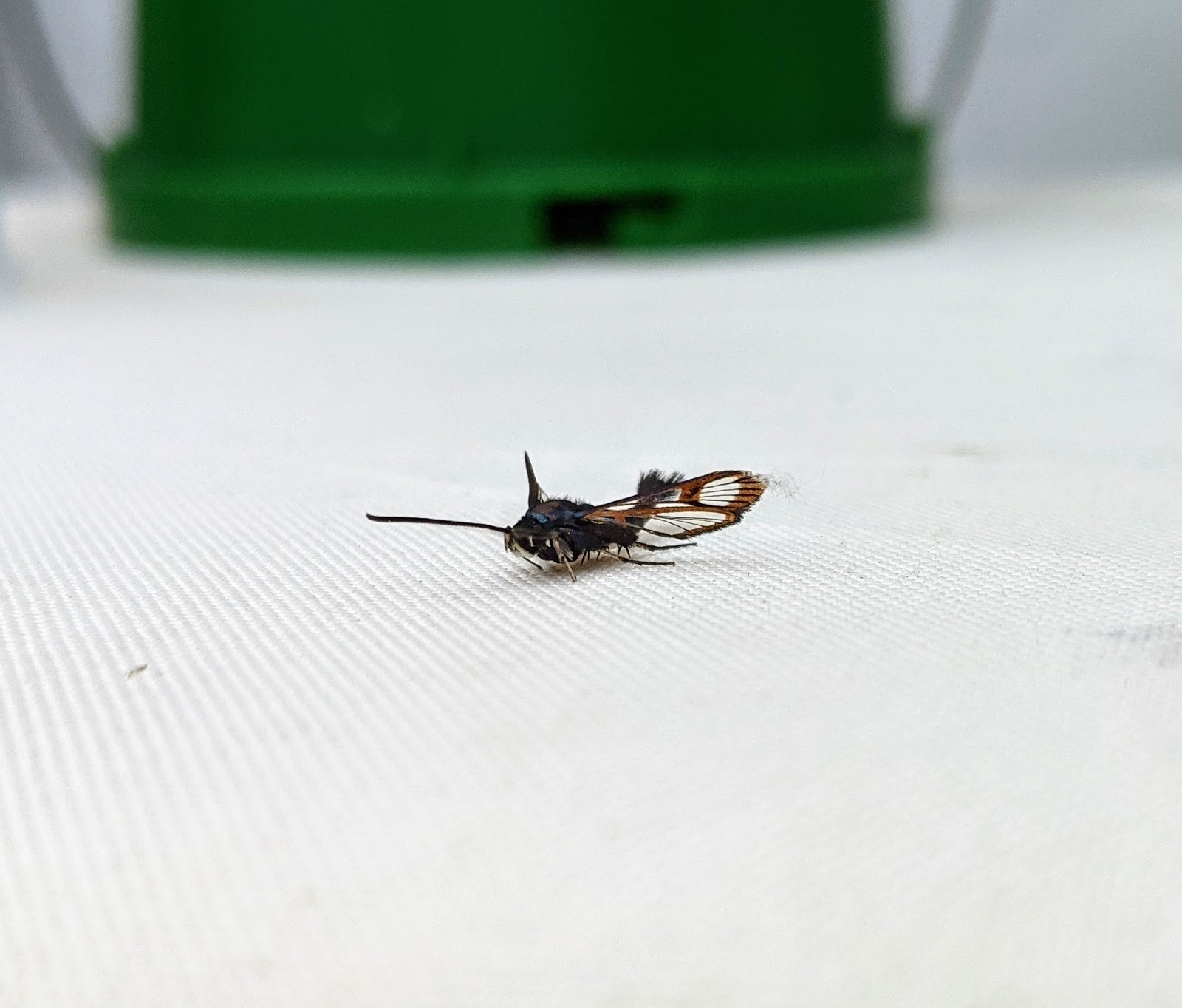 Posted by Lee Taylor-Wheal at 22:42 No comments:

Had my first Clearwing species for my new garden in Evesham today.  Red-tipped to FOR lure.
Have chanced the Large Red-belted with CUL lure clearly with no success, but if you don't try.
Will try MYO tomorrow for Red-belted
Lee 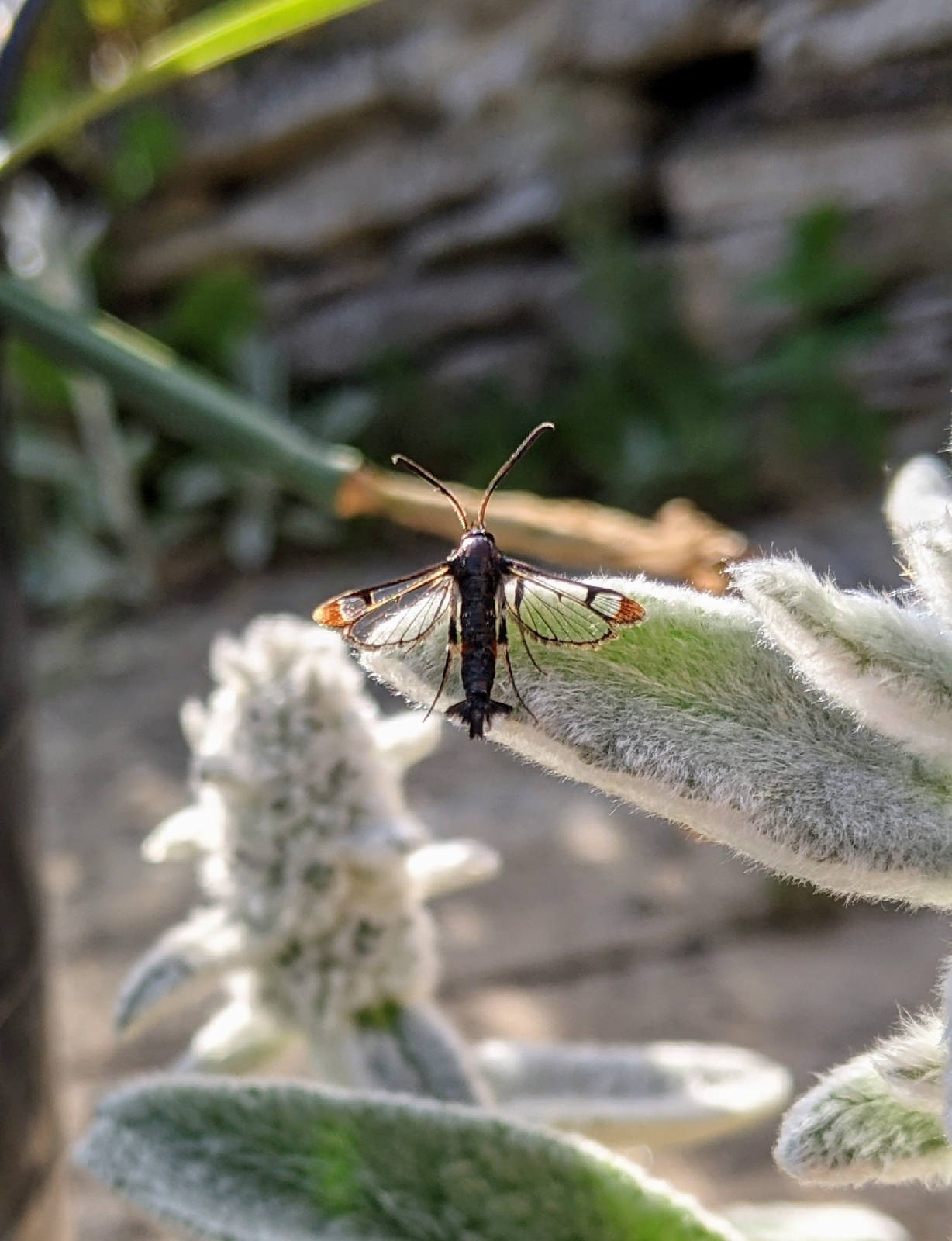 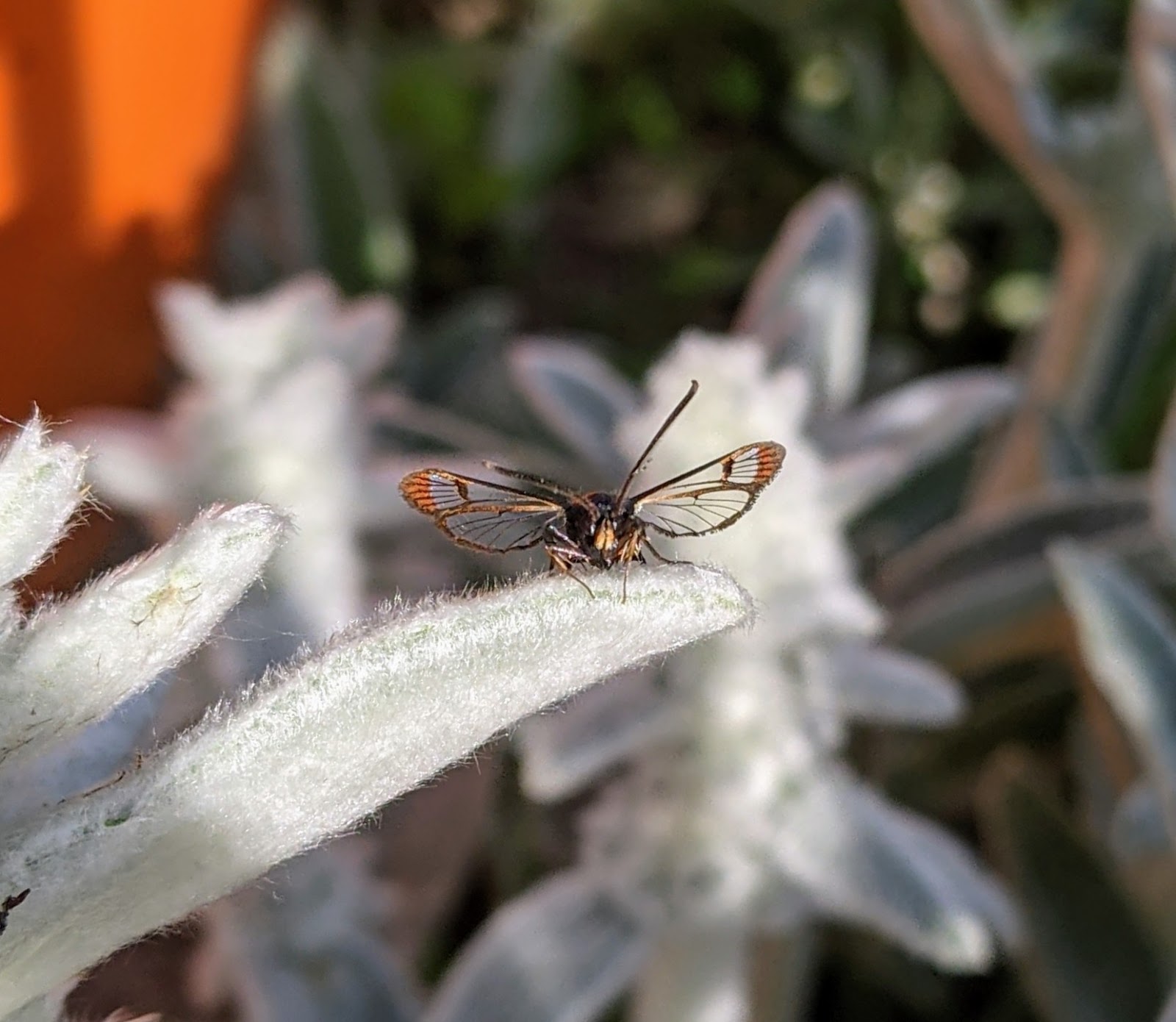 Posted by Lee Taylor-Wheal at 17:36 No comments:

I'm pleased to report that the small colony of White-barred Clearwing is still there at the forest and 2 were lured to the TIP pheromone today. Peter Hall 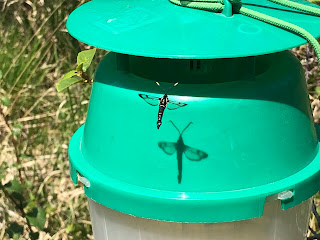