A few highlights from the Warndon garden in last few days have been an obvious best ever show of Twin-spotted Quakers.

An even better Dotted Chestnut was only the 6th here ever.
﻿
Always amazed to see how well Herald's look after 6 months of hibernation.
A quick visit to nearby Trench Wood NR on Tuesday afternoon in bright sunshine and along the main track from the car park to the central clearing.
With the intention of seeing Orange Underwings! Six moths immediately  alighting on the bare ground were actually Light Orange Underwings - a species which it seems, prefers lower levels on warm days. Not that surprising as the mature Aspens were in full flower.  I used to look for this moth in early April but it seems it is out early this year and despite scanning the tops of several mature birches, no sign of its cousin that afternoon - so perhaps that was out in February this year and gone over already. ﻿

Posted by Steve Whitehouse at 17:13 No comments:

Having had several Ecotoedemia heringella adults in my garden over the past 3 years I was keen to see another scarce Nep that feeds on Holm Oak. During the past 2 winters I have been collecting what I had presumed to be Stigmella suberivora mines found on trees at 5 different sites in Worcestershire. However on inspection with a 10x handlens the completed mines always seemed to have been vacated and exhibited a neat crescent-like exit slit at the end.


About 8 lots of leaves h...ave been over-wintered but all that ever emerged were black flies, tiny wasps and a few dark beetles. Having just seen a Glossy Ibis in south Worcestershire on the 2nd March I remembered I was just a short distance away from a huge lone Holm Oak near Longon village. LIke a Sri Lankan 'tea picker' I just quickly stuffed about 100 leaves into a plastic pouch and set off home. Inspecting a few mines later I was hopeful that at least some contained heingella larva which would pupate and produce. Lightly spraying the leaves every 2 days, a few flies stated to appear inside the tub. Then on the 20th March, a late night check saw a tiny black shape on the underside of the fine muslin cover. Thinking it would be another black beetle, I rather nonchalantly peeled the gauze back and saw the insect had dropped onto one of the top leaves. A slender glass pot was to hand and I managed to get the beast in without any fuss. Imagine my absolute delight when I spotted the bright orange head, subtle purple-bronze gloss on all dark wings - at last Stigmella suberivora.

Posted by Steve Whitehouse at 09:00 No comments:

With a second colony of Barred Tooth-striped recently discovered in a nearby village I was keen to see if it also occurs in VC 37. So on Tuesday evening a pheromone trap was placed on Gadbury Bank where there is ample Privet growing on southeast slope. Four light traps and another pheromone trape were placed on the wide verge along the lane either side of Glebe Barn. The first trap round saw a Red Sword-grass already settled on the sheet by my old 80w funnel trap. A good start as less than 20 records in Worcs ever!
On the second round, another even better Worcs moth a Small Eggar on an egg box in the same trap!
A Grey Shoulder-knot was found hanging on a hawthorn twig near an actinic and inside that trap was a Dotted Chestnut.
Agonopterix alstromeriana, 3 Dark Chestnuts, 6 Shoulder Stripes, a Water Carpet and an Early Thorn were the best of the rest but alas no BT-s were seen. An extra time visit to the Bromsberrow garden (Glos) secured views of a Barred Tooth-striped  caught there that same evening.
Posted by Steve Whitehouse at 11:39 3 comments:

The night of the 18th was another milestone here, finally producing a Pale Pinion in the Robbo. It's only taken 15 years of trapping!
A very striking Hebrew Character with what looked like a bit of extra dark chocolate in the mid-wing mix.

A couple of Twin-spotted Quakers were surprisingly only the 5th and 6th ever here including this subtle sandy freckled individual.
Quite a few Diurnea flagella this week and another Grey Shoulder-knot along with better numbers of Small Quaker and 2 Early Thorns.
Posted by Steve Whitehouse at 11:01 No comments:

When I looked for mines of this species in June last year they were nearly all vacated, only one tenanted mine was found and collected so I was delighted to see the adult moth had emerged this morning.


Posted by Patrick Clement at 13:51 No comments:

Last summer Andy Warr was searching a WWT nature reserve near the M50 on the 1st June when he came across some curious tent-like spinnings in hawthorns. When he looked closely he could make out many quite dark Lepidoptera larvae moving about inside. Lower Smite Headquarters quickly identified images of these as Small Eggars, a moth species currently of very local status with just  a handful of sites in South Worcestershire.
﻿﻿
I visited the site a few days later and noticed that the larvae were larger and more brightly coloured in two later 'instars'. One or two of the larger more adventurous larva were even roaming about away from the tents on adjacent branches.


I decided to take one with the plan of rearing it through to an adult. It was fed on blackthorn and hawthorn and surprisingly still took over 4 weeks to attain full size and pupate. This was then overwintered in an outside rabbit hutch with open grill front inside a large plastic airy container with ample blackthorn and hawthorn leaf litter base. Last week I was rewarded with a fantastic pristine adult female emerging from the pupal case on 15th March.


The moth was quickly transported back to the exact hedgerow that evening and photographed on a post top before being placed inside a greening-up hawthorn.

If any of you still have 2018 records that haven't been sent in to your County Moth Recorder (details in the links on the right), please try and find time to do so.  Here in Herefordshire, I have now taken over all moths, so please send records in to me, although Phyl has kindly still offered to process records for me, so if you prefer to continue to send in to Phyl, that is also ok. I've been very busy trying to update the Micromoth database and it has more than trebled its records over the past 12 months and still more to go in. I'm now working on the Macromoths (which Phyl has done an excellent job in maintaining) and hope to have these ready by the end of the year. I'm adding missing records from some of the recorders and will also scrutinise the database for errors in the process. For those living in Herefordshire, the database summaries will be readily available upon request once the work is completed and hopefully by then the on-line distribution maps will be up and running too. I'll update you all when I'm close to completion. I am able to answer records queries from now on, so please feel free to aks questions if any arise. Peter Hall
Posted by Peter Hall at 12:25 No comments:

Plans to go and hunt for Barred Tooth-striped were put on hold last night due to the winds and as is typical with the law of sod, at dusk here the winds dropped to nothing (although they did pick up again a bit later). I put out a trap in the garden and recorded 154 moths of 15 species. In order of recording they were: Twin-spotted Quaker (9), Clouded Drab (20), Shoulder Stripe (6 - 3 of which were at my study window), Common Quaker (72), Small Quaker (20), Oak Beauty (6), Pale Brindled Beauty (1), Yellow Horned (2), Hebrew Character (7), Early Grey (2), White Marked (2), Red Chestnut (4) and Chestnut (1), Agonopterix ciliella (1 - at study window) plus an Acleris sp. tbc. Peter Hall

An adult emerged today from a mine on birch collected at Hartlebury Common on 28th May 2018.

Posted by Patrick Clement at 16:55 No comments:

Always mixed emotions when finding Clothes Moths in the house but I was pleased to have a new species regardless. Certainly not a common moth in VC37 these days but it just shows what can be achieved by buying a new and expensive woollen carpet! 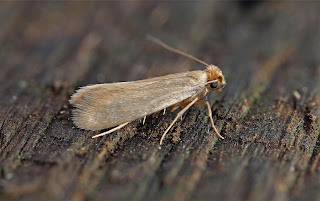 For the past few years, around this time, I have been searching the rough grasses on the edge of Windmill Hill for Elachista mines in the hope of finding E.stabilella. This is the only site we have for this moth in the county. It had not been recorded since 1999 despite several searches for mines and sweep netting the area at various times. I was beginning to think that it might have died out on the site, so I was very pleased to find 3 mines on my search this year. The larvae looked right according to published descriptions, but it is still something of a shock when the moth you were hoping for emerges from it's pupa. 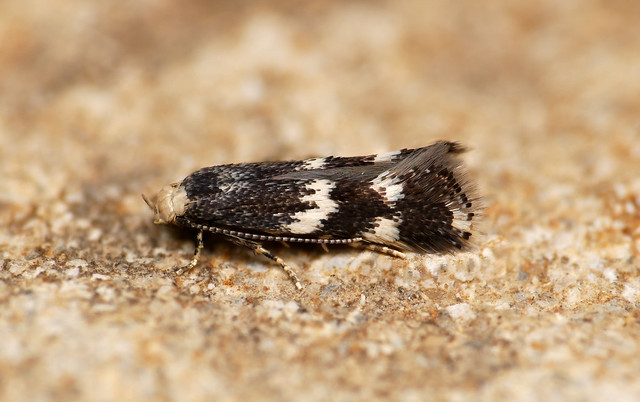 Not the most exciting looking moth perhaps, but it is good to know that it is still on site. Maybe the next challenge is to find a new site for the species, but we are painfully short of calcareous grassland in the county, so options are limited.

Following a tip off that a recorder based in 'Worcs' had photographed a Barred Tooth-striped by a house door on Thursday, announced on social media,  I quickly responded by testing my own ALS Pheromone Trap loaded with a B T-s pheromone bung in my Warndon back garden thinking 'well you never know'.

Imagine my feelings just an hour later when I spotted a geo fluttering about through the opaque bottom holding section. Panic off the moth was an Early Thorn. However this short experiment proves one thing - it works. Later this week I plan to check a few bits of habitat in extreme SW Worcs with the trap and maybe some lights. After contacting the above observer via West Midlands Butterflies Facebook it was found that two Barred Tooth-striped were actually seen in NNW Glos about 5 miles from a known colony at Corse. Perhaps time for observers in Herefords to look at a few places on their side of the boundary.

Posted by Steve Whitehouse at 12:16 No comments:

Finally had a night warm enough to encourage me to run a garden trap.  Not bad at all for February either with 16 species on offer - 13 macro and 3 micro. Topping the bill Common Quaker with 34, the rest all single figures but included Twin-spotted Quaker (1), Shoulder Stripe (2), Engrailed (2), Dotted Border (6), Pale Brindled Beauty (1), Yellow Horned (2), Oak Beauty (1), Hebrew Character (3), Chestnut (1), Small Quaker (3), Red Chestnut (1), Clouded Drab (1).  I haven't looked at the micros as yet, but one Caloptilia, one Ypsolopha and one Acleris. Following on from the Orange Underwing sightings, the next day I spotted 2 in the garden here and they (or it) was more interested in the Elder tree rather than the Silver Birches next to it. Timed at 1pm and just after 3pm.  Peter Hall
Posted by Peter Hall at 09:49 No comments: