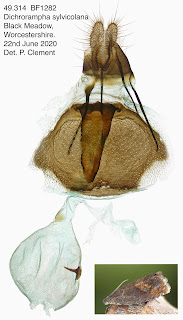 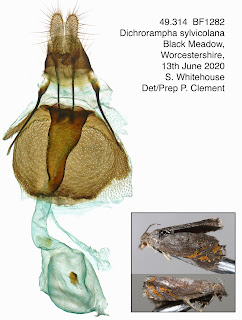 Posted by Patrick Clement at 16:20 No comments:

The night of the 12th June here at Warndon was mild with some drizzle and the best macros were Small Emerald and Barred Straw. A micro potted off the first egg tray took my eye as I had found it before in Suffolk and at Wicken Fen, Cambs. A very different shape to most common Gelechids I get here. Later detailed examination by Patrick Clement confirmed it was indeed a male Anarsia innoxiella - a first county record. The species arrived in Wilts at Swindon in 2016 so I guess it was expected here at some stage.

Posted by Steve Whitehouse at 11:24 No comments:

On the 26th At my MV 125w I had a Boxworm moth, I hadn't realised it was a county first! Hence the delay in posting. 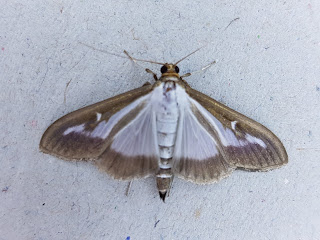 Also firsts for my trap 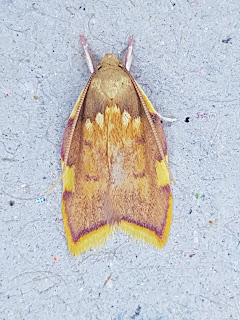 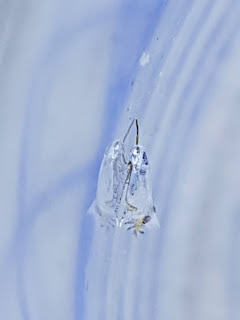 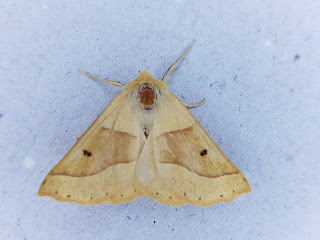 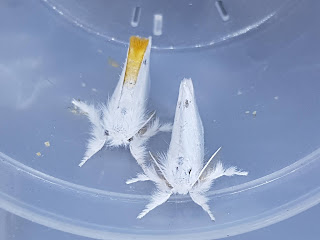 Not new, but liked pic! Shame their in pot! Yellow-tail

Some from the 25th 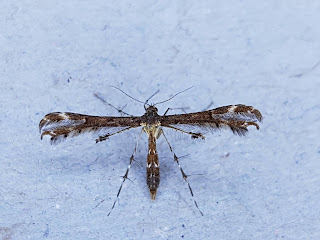 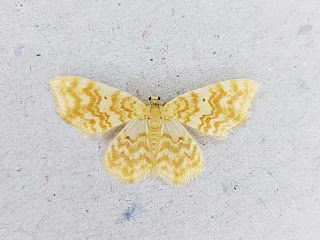 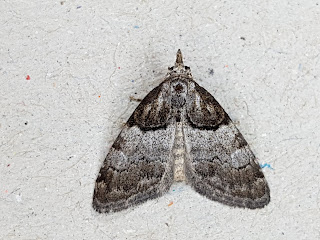 I've pretty much ID'ed these my self, but thanks goes to Peter Hall for all his help with general moth related queries and ID'ing anything that isn't blatantly obvious.

On opening the trap this morning, amongst the usual suspects was a Poplar Hawk-moth, not uncommon in my trap but when moving it out I noticed something unusual. To cut a long story short it is a Bilateral Gynandromorph! That means that one side of the moth is male and the other side is female, in this case the left side is male and the right side is female.
When the egg cell or ovum is fertilised by the sperm it forms a single cell which would normally develop into the caterpillar and so on. The usual pattern of cell division 2, 4, 8, 16 occurs until certain cells start to differentiate at a different rate to form nerve cell, gut cells and so on. In a Bilateral Gynandromorph the first cell division produces the usual two cells but something has happened to the sex chromosomes during this cell division and the resulting two cells each have a different arrangement one male and one female! The two cells produced normally go on and produce the left hand and the right hand halves of the moth so the same happens here and the moth ends up one side male and one side female.

Here endeth the first lesson. Once a Biology teacher always...."

I was asked the question "How often does it happen?

"I suspect with the size of your average moth and the fact that with things like Heart and Darts where all you are doing is counting them plus the fact that many moths do not show any sexual dimorphism (ie male and female look the same) it is not spotted that often even when it does happen. The antennae as seen here may be the best place to see feather male as against plain female, but even that it is not obvious at first sight with this Poplar Hawkmoth. It is only when you look at the antennae carefully or through photographs that you see that they are, in fact, different. I know in many of the older Butterfly books photographs of Gynandromorphs sometime appear, the Orange Tip or Blue butterflies are favourites again more easy to see."  Martyn Davies 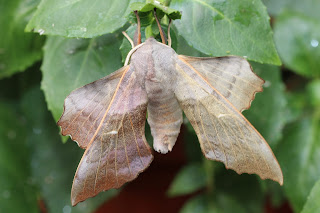 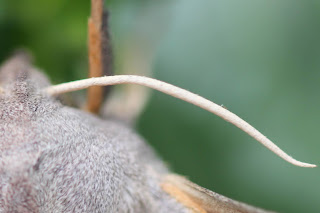 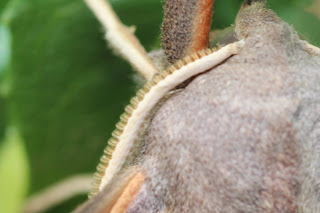 Oncocera semirubella was the highlight of a recent visit to Penny Hill land fill site. Not one but two specimens, new for Worcestershire.

My permissions have arrived to return to the woods, so last night, with it being so warm, I ventured out to Wigmore Rolls for a 3 hour session. At lights on it was 23 degrees and lights off around 2am it was 17 degrees, so a warm night. And a slow but steady arrival of moths too. Topping the bill (unusually I think) was Satin Beauty with 56 individuals. Minor Shoulder-knot also did well (35) and it was good to see Satin Lutestring. All full list (wth a few still to id later in the year) is below. I think there are 122 species. Peter Hall