Until recently all Worcestershire records of this species were of mines on Wayfaring Tree, Viburnum lantana, and all from the southern half of the county. In October last year I found a single mine on Viburnum tinus, the evergreen, winter-flowering cultivar often seen in parks and gardens, and this was retained in the hope of rearing an adult. 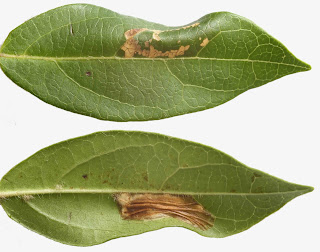 In December I discovered several old mines on a large Viburnum tinus bush close to where I live in Halesowen and although these were all vacated or predated, two still had exuviae present, allowing identification of Phyllonorycter lantanella from the pupal features, in particular the cremaster. 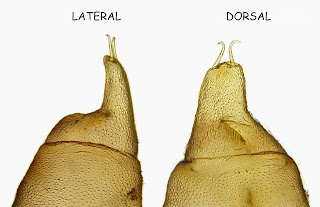 In the new year further searches around Halesowen located 3 more bushes allowing the collection of 16 mines, in two of which, live, overwintering larvae could be seen. 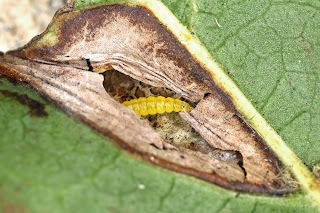 These mines have so far shown a high level of parasitization with the emergence of 7 parasitoids and just one moth, on April 18th. 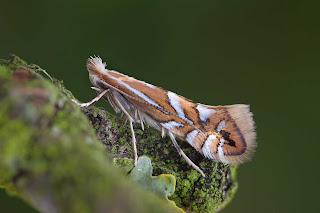 This species has obviously gone unnoticed in my area so it may well be worth checking in yours, you may still have time to find occupied mines from which adults may emerge.

The latest offering from Butterfly Conservation can be viewed from here: https://butterfly-conservation.org/17911/e-moth.html
Peter Hall
Posted by Peter Hall at 08:30 No comments:

Pretty average catch last night here, certainly compared with last week. Undoubted highlight though was this Broom-tip, not something I was ever expecting to see in the garden. 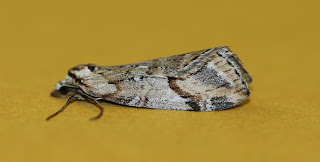 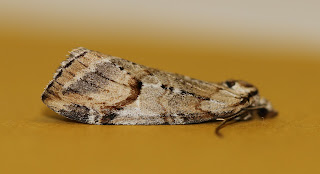 Last Thursday, Myself and Patrick Clement ran four traps on the new WWT reserve in the Wyre. The site is small but varied with damp meadow leading to a steep bank that is quite open woodland on the top.

A warm still night produced a good haul of 42 species, of which 12 were micros.
While the bulk of the catch consisted of the usual suspects for the location and time of year, one or two were particularly nice to see.

Calybites phasianipennella was only the second record for SO77 and the first for the forest.
Dahlica inconspicuella is quite common in the forest but it is quite rare to see the winged male adult of this bagworm. Its triangular cross section larval cases can be found on old fence posts in many parts of the forest.


Brindled pug and Lunar Marbled Brown were the most abundant moths of the evening with 86 and 76 individuals counted between the four traps.

White Marked can be elusive even in the forest so it was nice to see a couple of examples, even if they are a little worn now at the end of their flight period. 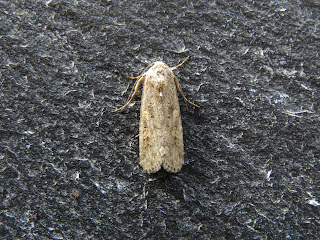 This Small Mottled Willow came to a 125 mv I had put out in an asparagus field by my house at Norchard, Worcs last night. New for year here were Chinese Character, Larch Pug a Swallow Prominent.
Posted by Mike Southall at 18:15 No comments:

I made a last minute decision to go and trap at Haugh Wood last night.  I was watching a storm track slowly up towards the wood, but in the end it almost missed the site and I sat in the car for 15 minutes only.  It was warm for the first couple of hours and for the time of year, fairly busy.  376 moths caught of 29 species in just short of 3 hours trapping time, commonest by far was Brindled Pug with 146 individuals, although Lunar Marbled Brown did very well with 86 and these gave the feeling of constant activity as they flew lazily across the white sheet taking an age to settle down either in or around the trap.  Of interest for me at least was a single Dotted Chestnut and a couple of Broom-tip - a speciality of this wood, although I think most records are from the south side, last night I was trapping in the north section.  Peter Hall

Blossom is out at Bringsty

Whilst kicking off a planned series of visits to Wigmore Rolls (and forgetting to pack cable),  I ran my old Robinsons type in the garden here.  21 species for the garden, all expected species with an "abundance" of Powdered Quaker - well 4 last night and 5 the night before - more than I can ever remember catching in one night anywhere, plus my first Blossom Underwing for the garden.  I wondered if it was here.  Wigmore, with a single trap being run produced the expected abundance of moth numbers (259 moths for a 2 and a half hour session).  21 species again. Topping the bill was Diurnea fagella (66), then Hebrew Character (40), Brindled Pug (37) and Common Quaker (28), otherwise nothing to excite too much.  Peter Hall

The Kinver Moth Group decided to pitch their first meeting at the adjacent Kingsford CP,  most of which is in VC37. We met by the old toilet block in the car park on Kingsford Lane at 19:15. Four MV traps were set in the heathland section on the opposite side of the road and an actinic was placed on the edge of the car park. At least 30 species were recorded in what were good overcast conditions. The highlight were at least 3 Mottled Grey which may be new for Kingsford.
﻿
Other things of interest were a Herald, possibly just out of hibernation from the nearby caves, Red Chestnut, Early Tooth-striped, Shoulder Stripe, Water Carpet and Yellow Horned. Micros included Acleris cristana, Eriocrania sangii, Caloptilia betulicola and best of all a Carpatolechia decorella in the actinic. Regular meets are planned on the first Friday of each month and Dave Smith can let you know where we will be. Feel free to email me for contact details; stevewhitehouse123atbtinternet.com - remember to slot @ in!

Posted by Steve Whitehouse at 11:12 No comments:

Remembered to put 1 trap out overnight.  Not bad even with temperatures dropping in to single digits fairly quickly.  179 moths of 17 species.  The species lists slowly change with time as new for the site for this year are Early Thorn, Early Tooth-striped, Streamer, Water Carpet and Pine Beauty.  Top of the list was Common Quaker (51), followed by Hebrew Character (33), then Small Quaker (29) and Clouded Drab (23). A single micro: Diurnea fagella, which is odd considering the numbers of Agonopterix heracliana that come to the nearby house windows every night, but not to the trap.  Peter Hall


Not the most colourful of moths but the first Worcester record of the species for 35 years, according to my Mapmate.
Hartlebury Common is the only site for it in Worcs but also recorded at Kinver Edge, Staffs, a few years ago.
4 individuals swept from heather in about 30 mins yesterday.
Patrick Clement
Posted by Patrick Clement at 15:42 3 comments: