Yesterday it was the annual meeting held in Birmingham. Over subscribed again with a waiting list. There were a number of people attending from Hereford and Worcester and I think for once, Hereford outnumbered its close neighbour in attendees. I'd publish a photo of them but they sneaked out early.

There were talks from a variety of people and most were very interesting. Zoe Randle announced the structure for the regional and national verification panels for inclusion of micro-moths into the system. A number of us from the 2 counties are on the Midlands panel I'm pleased to say. After Zoe the programme was:
Changing Fortunes of Moths in Yorkshire by Charles Fletcher (Yorkshire CMR). A very interesting talk on increases and decreases of certain species due presumably to climate change.
Conservation of Fisher's Estuarine Moth by Zoe Ringwood (Natural England). Where she spoke of its perilous survival and measures being taken to not only protect it, but increase its range
The Bordered Grey enigma by Paul Brooks - an Englishman living in Angus. How he was tasked to find out more about the Scottish colony which he was successful in doing
Burnets, cyanide bombs and colonisation by Mika Zagrobelny (Copenhagen University). Fascinating talk about the uses of cyanide in the 6-spot burnet
The Dark side of Street lighting by Callum MacGregor (Newcastle University/CEH). The affects of street lighting on moth behaviour
Some like it Hot by Georgina Palmer (York University). Reasons why species respond to climate change
and finally A Focus on Moths (the Youth Nature Network). A society trying to get young people involved in the outdoors

In between it was a chance to catch up and chat with colleagues from around the country. Over 200 people attended and a buffet lunch was supplied. The image was after the mid afternoon coffee break where some unscrupulous folk had sneaked out to head for home, leaving a few empty seats. 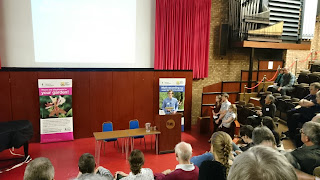 If you've never attended one of these events, you should think about going. It's well worth your while. They videoed it all and are going to try and upload the days' speakers and produce a video link on the BC website of the day. When this happens I'll let you know and provide a link to view.  Peter Hall
Posted by Peter Hall at 16:24 1 comment: 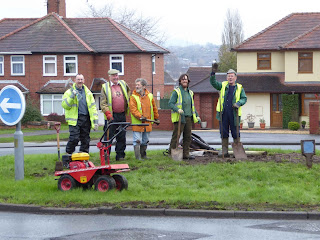 As part of the 'Scarlet Tiger Project', initiated by Joy Stevens in Stourbridge, Butterfly Conservation West Midlands members assist Dudley Council employees to remove turf on a traffic island prior to seeding with wild flowers. 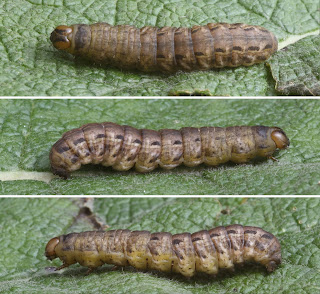 Find of the day (the only find) was a Large Yellow Underwing larva which was disturbed as we removed the turf.

I have recently been organising all my moth photographs, adding the new ABH checklist numbers and changing the names where necessary. It was a long job with photographs of moths and dissections on both my computer and Flickr. During the process I repeatedly found myself thinking ‘I haven’t seen that species in the garden for ages’ so I decided to check my records for the facts.

I remember the summer of 2006 as being the best season for moths since I became seriously interested in 2003. A good year for migrants too, when even my poor-for-migrants garden recorded Bordered Straw, Scarce Bordered Straw and Small Mottled Willow. In checking the records I discovered there were no less than 50 species recorded that year that I have not recorded since, including lovely moths like Scallop Shell and Netted Pug.
A decade on the general decline of moths is also, probably, partly responsible for my failure to record some of those 50 species since 2006, although I continue to record a handful of new ones each year and in 2015 a friend of mine, just a stone’s throw away, recorded several species in his garden I have not seen here, so there is still potential for more garden firsts.

Whatever the reasons behind fluctuating moth records, here’s hoping 2016 is a good one for all of us!
Patrick Clement
Posted by Patrick Clement at 12:37 4 comments:

Posted by Steve Whitehouse at 18:31 2 comments:

I dusted down the moth trap last night and removed the resident spiders as the forecast was for very mild conditions. I was hoping for a Spring Usher as it hasn't made it onto the garden list so far, but all I caught was Pale Brindled Beauty (1), Tortricodes alternella (1) and an Acleris species (1) to be determined later. Better than my last effort of a few weeks back which caught nothing. Peter Hall
Posted by Peter Hall at 10:48 3 comments: 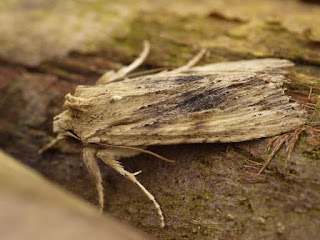 This Pale Pinion was flying around the sitting room last night presumably having had a lucky escape from the logs brought in for the wood burner, Phyl King
Posted by Phyl King at 21:08 1 comment:

The latest Emoth newsletter from Butterfly Conservation can be downloaded by clicking on the image. 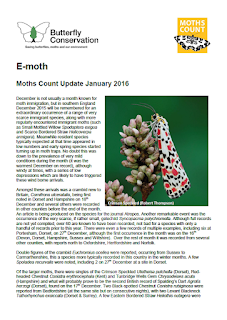 Happy New Year!
The Blog has been running now for almost a year. Thank you to all who have contributed to it and made it work. I'm hoping the usage will expand during 2016.

There are currently 10 countries viewing our Blog. The top 3 are the UK (of course) then the USA followed by Germany. To date this year we have had 15,130 views. The top 2 posts are Dave Wilton - An Outsider Post  - dated June 27th which had 374 hits, followed by Oliver Wadsworth's - Borderland Mothing - post from February 13th with 86.

We currently have 24 members and after some abuse from an Indian site mid-summer I made it members only for comments.

Now is the time of course to collate all of your records and send in the files to the County Recorders. With the impending inclusion of micros fully in to the system for Butterfly Conservation, the smaller moths are now just as important as the larger ones.

Wishing you all a very happy and successful 2016
Peter Hall
Posted by Peter Hall at 11:41 No comments: