Tony Simpson and I ran light traps at Trench Wood last Friday night to provide moths for a Moth Breakfast organised by Butterfly Conservation the following morning.
Conditions were good and the traps were busy with the usual species for the time of year plus one or two local specialities and one new moth for the county.
A little over 100 species were recorded in total.

Trench wood is our only site in the county for Mere Wainscot. First recorded in 1945 and still regularly seen at light in the wood. Nationally, the moth occurs mostly to the south and east in Oxfordshire, the Fens and the Brecks in East Anglia.

The warm, still conditions made it a good night for micros. A number of Gelechiids were seen including Carpatolechia fugitivella and C.alburnella. Also the large Tineid, Morophaga choragella, which looks like a Cork moth on steroids being nearly twice the size.


The surprise of the night was a very fresh and bright Eudonia delunella. This is a new addition to the Worcestershire list. The bulk of the English records are from Cornwall, Dorset and Hampshire. It is also recorded regularly in Wales and once from Herefordshire, but it is largely absent from the central part of the country so its appearance here is unexpected.
Oliver Wadsworth.

Posted by Oliver Wadsworth at 14:15 No comments:

It's been a good summer so far for Hawk Moths in SE Worcestershire. Garden records since 23rd June include 2 Pine's, 4, possibly 5 Privet's and at least 2 Hummingbird Hawks alongside the commoner species. 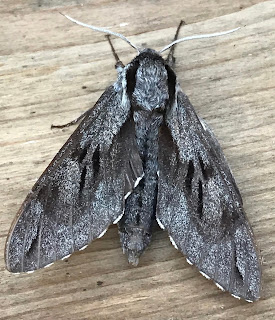 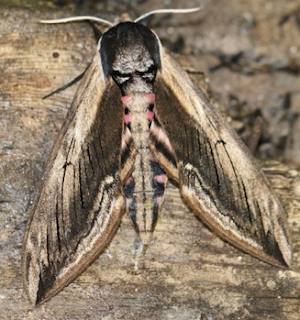 Other species of note include a couple of Blacknecks, Cream-bordered Green Pea, a migrant Vestal on 29th June and Festoon on 8th July. 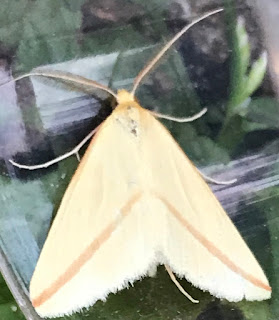 Posted by Gavin Peplow at 23:11 No comments: 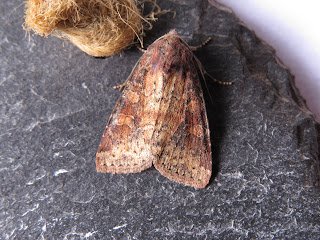 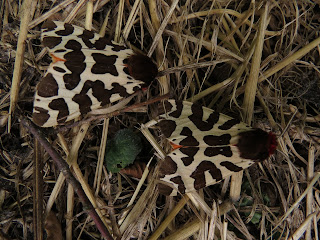 I ran two traps last night on the south side of the wood. It was slightly cooler than forecast, so moth numbers were also supressed a bit. Lots of glow-worms and I was joined for 45 minutes by Ledbury Naturalists on their glow-worm hunt. Males were attracted to the generator light as per usual. 120 specis of moth, huge numbers of Epagoge grotiana and Aleimma loeflingiana made for a busy night. Of interest was a Ruddy Carpet and an Endotricha flammealis also appeared. Not a common moth in the county and most records from the Doward. Mocha, Blotched Emerald, Leopard made appearances and the Footman moths are also starting up, with Scarce and Common featuring. Peter Hall

Saturday night at Ravenshill Wood, near Alfrick in Worcestershire.
Good conditions contributed to a very good evenings moth trapping at this privately owned woodland. Four traps produced over 100 species including several new for the site which has not been trapped for some years.

Also notable was a number of the seldom encountered Eidophasia messingiella.

There was a 'Bio Blitz' event at Hartlebury Common last weekend with Moth trapping on the Friday evening. As always with these event we were at the mercy of the elements, but for a change we had good overnight temperatures and next to no wind - always a good thing on an open site like this heathland fragment.
Most of the usual and expected species were seen between 10 or so traps. These included site specialities Archer's Dart and Pempelia palumbella. My own trap caught Scarce Silver lines and Sophronia semicostella, pictured below.

With such good conditions we might have expected better results, but catches were only 'average' for the time of year with maybe 50 species per trap. The night total may nudge 100 when all the results come in.