Now its cooled down and time to reflect on the last 10 days of activity. A well-marked Mompha in the Warndon garden trap on the 15th looks good for divisella which has only been recorded from four VC37 sites, although from stats Feckenham Wylde Moor may have a colony.
﻿
A last minute dash to Trench Wood on the 18th seemed very slow by 22:30 when Frosted Green seemed the best moth. Then in the last 30 minutes a fine Carpatolechia proximella arrived, followed by a very skittish Elachista apicipunctella.
﻿﻿ Apicipunctella was new for the reserve. The only other micros were 8 Dyseriocrania subpurpurella.
Posted by Steve Whitehouse at 20:12 No comments:

An adult has emerged from the raspberry stems collected a couple of weeks back at Broadway Wood.

Last night the weather was optimal for moth trapping I think. It stayed mild all through the 3 hour session on the National Trust Brockhampton Estate here in Herefordshire. It's never "busy" at this time of year, but there was a steady influx to the 2 Robinsons running. List below, for those who know their timings, the Common Footman was a larva! 40 species I think and around 238 moths. The garden trap was similar species wise at 39 but fewer moths (1 trap running). My first Alder Kitten, May Highflyer, Grey Birch and Silver Cloud of the year. I'm off abroad this evening to Blenheim Palace in  Oxfordshire so it will be interesting to see how that is comparing Peter Hall 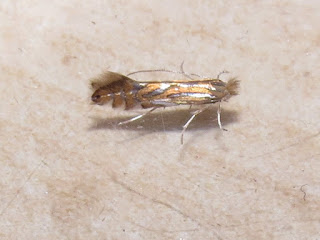 I have just potted this micro from my actinic in the garden at Norchard, Worcs, and think it might be Phyllonorycter platini?
Posted by Mike Southall at 22:17 1 comment: 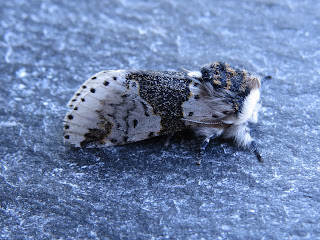 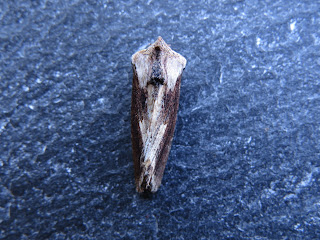 Alder Kitten and Silver Clouds were among a host of new arrivals to my Worcestershire garden at Norchard last night, including Cinnabar, Common Wave and Spectacle.
Posted by Mike Southall at 19:12 No comments:


I chose the well wooded hilly section of the forest to shelter from the moon. It worked as it never appeared until pack up time at midnight after a 3 hour session. However, the forecast minimum of 11 was wrong (as per usual) and it had touched 7 at pack up time, so moth activity was curtailed this time by temperature. Tonights excursion has been postponed for a night as it should get milder from Monday for a few nights. The traps were set up about 60 yards apart ann not in line of sight as per usual. Interestingly one trap recorded 16 Great Prominent, the other had none, so it maybe shows how local species can be and how important chosing the trap location is too. Lunar Marbled-brown topped the numbers list with 51, Great Prominent next, otherwise it was much as you would get in the garden. Just 18 species. Peter Hall

It's nice to get warm nights in April, so it was with a tinge of excitement that I went off for my first outing of the year to Haugh Wood. At swtich on it was still 15 degrees and just as I sat down (having positioned a trap wisely right next to a bench), the biggest moon I have ever seen became visible just above the horizon. So I had about 45 minutes of moth activity then it became so bright that it almost shut down any moths arriving at all. Very disappointing. Lack of leaves in the woods didn't help. Of the 3 hour session, the last hour was largely spent reading my book. 18 species of macro and so far 3 micro, with 3 more to id when I get a moment. The range of moths is changing now to include late Spring/early Summer species. So apart from the usual crew I also recorded Mocha, Lesser Swallow Prominent, Lobster, Least Black Arches, Purple Thorn, Great Prominent and what I think is the earliest ever Tawny-barred Angle for Herefordshire. In recent days my garden has turned up Clouded Silver and Maidens Blush. I'll try again tonight elsewhere, but will remember to take my book again, and maybe sunglasses too. Peter Hall

You will notice that anyone who registered with a Google+ option on the blog is now listed as "Unknown" on the right hand side. I can still see e-mail addresses in the Settings but I have no idea if you can post anything still. Can someone have a go? It's rather annoying! Peter Hall
Posted by Peter Hall at 14:29 6 comments:

I've had quite a lot of species so far this year, largely by trapping in Whitchurch, in the south of VC36. The highlight so far from there came in on Sunday night, a Red Sword-grass, which laid a lot of eggs in the pot. These are getting sent off to be reared by someone with more experience than me in these matters.
My garden trap in Hereford has been quiet so far, with a couple of Scarce Tissue on Tuesday the highlight so far. One of these was very pale, but not worn at all. I've not seen this illustrated.
John

I was keen to photograph this attractive but scarce little moth but the only recent Worcs. records were from Broadway Wood (Oliver Wadsworth), an hours drive for me from Halesowen. I decided to make the effort and last Saturday travelled down to look for larvae in the stems of raspberry plants hoping to rear pristine, freshly emerged specimens to photograph. I fairly quickly located one larva plus 3 or 4 stems with feeding signs which are now in containers at home, the larva having spun up beneath a leaf for pupation.
A throwaway remark by Steve Whitehouse this morning, "I wonder how widespread this species is?" prompted me to visit some raspberry growing on the Clent Hills, close to home, and after 10 mins searching I found a stem with feeding signs in two shoots. Carefully breaking one of the shoots apart revealed the bright red larva of corticella, bingo, a new site.
Returning home I remembered there was ample raspberry growing just 300 metres from my back gate, with the moth present not far away at Clent, could it also be even closer to home? You guessed it, yes, 7 wilting shoots with frass indicating feeding larvae, one of which was again removed for confirmation - what a result!
Patrick Clement

Although just outside both Herefordshire and Worcestershire, Laura Padley at Bromsberrow Heath (Glos) kindly sent me an image of an unknown 'flatbody' potted up on her back house door, under a conveniently placed soft light. Depressaria albipunctella had been distantly on my radar as it occurs vary sparingly at nearby Staunton, Berrow and the southern Malvern Hills ridge. However the only record this century in VC37 was at Carpenters Farm on 12th May 2006. So I was delighted to confirm the live moth on Tuesday evening and Laura has provided a record shot of what is a very scarce Na status species!
﻿﻿

Posted by Steve Whitehouse at 08:09 No comments:

Never had a March record of this before so two on Saturday the 30th is another early milestone for the Warndon Trap.


Just a reminder that the first 2019 effort of the Kinver Moth Group will take place at Kingsford CP this Friday 5th April. This is located on the west side of the NT property, probably best accessed via Wolverley and Drakelow. We meet at the car park near the toilet block in Kingsford Lane at SO824821. Sunset is 19:50, so interested parties are invited to meet there at 19:15 to give everyone time to set up. Remember, you don’t need to bring a trap and are just as welcome to join us to improve mothing identification skills or to help with identifications.
Posted by Steve Whitehouse at 17:55 No comments: