Jarred had reported a probable Mediterranean Flour Moth caught in a pheromone trap at the garden centre bird-food store where he works in West Hagley. Steve obtained a rather battered dead specimen which, because of it's poor condition, would require dissection and this was quickly followed by a live moth in good condition which I collected and photographed.

Both specimens have now been dissected and confirmed as Mediterranean Flour Moth, Ephestia kuehniella, apparently the first Worcestershire records for 120 years. The species has most likely been present during the intervening years, it just needs someone with an interest in moths to be in the places where it is likely to be found i.e. food stores, flour mills etc.   Patrick Clement


Posted by Patrick Clement at 16:11 No comments:

A warmer night, so out went the Robinson into the garden. A bit breezy for the first part, however in the end I recorded 14 species and in no particular order: March (2), Brindled Pug (1), Common Quaker (12), Small Quaker (31), Red Chestnut (5), Oak Beauty (2), Twin-spotted Quaker (4), Clouded Drab (2), Chestnut (1), Blossom Underwing (1), Early Grey (1), Hebrew Character (2), White-marked (1) and Emmelina monodactyla (1). Earlier in the week there was what is now the usual Mompha sturnipennella in my bathroom. About half the county records are from my house and garden. It induced a visit from Steve W, who then passed it on to Patrick C who took his usual wonderful photo of the adult, which you can view here:https://mothdissection.co.uk/species.php?Tx=Mompha_sturnipennella . Peter Hall 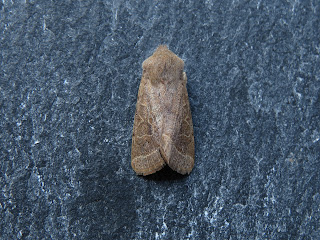 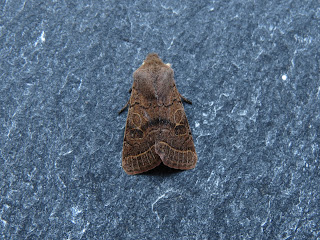 Numbers of Common Quakers rose to 15 in my garden at Norchard, Worcs on Friday night, in the relatively mild conditions. They included the ab. confluens, top, and a strongly marked individual, lower.
Posted by Mike Southall at 08:58 No comments: