Not a lot of excitement this way of late.  The late Summer lull is in full swing now and my trap is beginning to heave with the usual suspects for late Summer.  Last night Large Yellow Underwings reached a count of 75, just pipped by Square-spot Rustic at 78. And with the Forest Shieldbugs disturbing the moths on the egg trays it looked a bit frantic in the trap at times.  No signs here of any migrant activity.  the few Silver Y's all look past their best and even Plutella xylostella (Diamond-back) have stopped appearing.  I am getting "waves" of Acentria ephemerellas (Water Veneer) appearing around the trap with a best count just 2 shy of 100.  But it is erratic, last night just 3 counted, the night before it was 53, with most fluttering apparently helplessly in the grass, always on one side of the trap, even when there's no apparent wind.  Pale Eggar has been arriving - 2 so far and last night the first Frosted Orange. Still getting a few Centre-barred Sallow.  I'll have to check the records, but Poplar Hawk has been almost ever present this year with the 2 broods overlapping.  1 last night.  It is the best second brood Heart and Dart season I can ever remember with 47 recorded on the 17th. As for species counts, they are slowly falling away (with moth numbers increasing).  Last night 29 macros and 13 micros, on the 21st 31 macro species and 13 micros, the 20th 34 macro species and 19 micros.  It cools down now, so the traps will get a rest.

On the 18th I went out ot Moreton Wood near Ullingswick (Herefordshire) which is a wood sitting on a limestone outcrop.  Here I did get one migrant - a Dark Sword Grass - and other than plenty of Pretty Chalk Carpet and a few Fern, the list was as you would exepct anywhere. Peter Hall 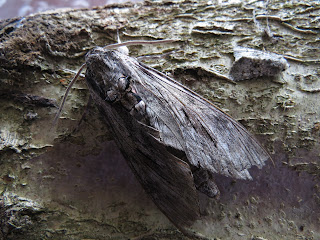 This Convolvulus Hawk-moth stood out among the other moths in the trap this morning. I also recorded my first site record of Small Ranunculus here at Norchard, Worcestershire.
Posted by Mike Southall at 13:54 No comments:

On looking through the micros that came into the trap last weekend at Abberton, delighted to find a Scythris limbella. 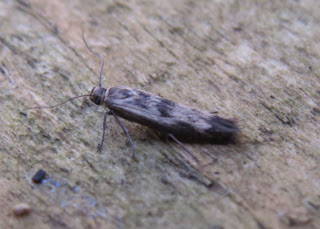 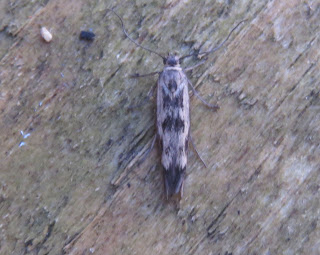 Apparently this is the 5th Worcestershire record and the first since one at Stoke Prior in 2004 - the three earlier records dating back to the 1870's !
Posted by Gavin Peplow at 00:05 No comments:

Last night the garden produced a county first with the arrival of a Webb's Wainscot.  It obligingly identified itself in the book.  Robin Hemming

I think it's been of no surprise to people to see the "late Summer lull" kick in early this year. Numbers have been dropping rapidly out and about and also in the garden.  Last night I was down to 2 individual Footman moths.  Poplar Hawk must be in their second generation by now, but they've been arriving at the garden trap almost inunterupted since late Spring.  5 last night. Elephant Hawk seem to have finally stopped arriving about a week ago.  I had a couple of Six-striped Rustic 10 days ago but none since.  Last night the first Rosy Rustic arrived.  I also had my first Nomophila noctuella of the year, so maybe migrants might start arriving in more numbers.  Trapping 2 nights ago in the Chilterns also saw a Dark Sword-grass.  I've not had the interesing influx that Ian M talks about here, but species like Large Yellow Underwing have suffered badly from the drought.  Only now have Flame Shoulder started appearing. Hardly seen Small Square-spot all year.  I'm still getting the odd Angle-striped Sallow coming to the garden, so that's done really well as have Gold Spot and I think that is reflected elsewhere too with this last species.  A single trap last night in the garden produced 43 macro species and 14 micro species with Dotted Clay, Olive and previously mentioned species of most note.  Numbers of Acentria ephemerella flapping helplessly around the ttrap late evening have been impressive with 88 counted 2 nights ago. Peter Hall