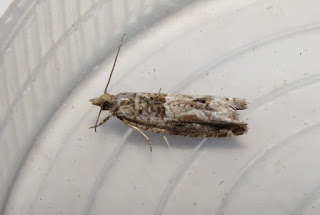 I found this Crocidosema plebejana in the garden mv trap this morning. Possibly a migrant and seems to be the third record for Worcestershire, assuming I have identified it correctly. A Pale Mottled Willow was also amongst a few resident species.
Posted by Mike Southall at 10:32 1 comment:


I trapped on 4th November with temperatures reaching a minimum of 11.3c overnight.

2 Traps produced 75 moths of 20 species of the usual Autumn mix very similar to Peter Halls last post. Even got single Large Yellow Underwings in each trap. Thought I'd seen the last of those.

I also had this Caloptilia which I reckon is either elongella or betulicola but as I am not familiar with either I wonder if anyone can confirm either way.

I believe the foodplant for elongella is Aspen which I do not have close by and betulicola as the name implies is Birch of which I have a large example in the garden. betulicola is also supposed to have white hind legs which this example seems to have but not as white as the front legs.

I am leaning towards betulicola but not sure if I have enough for a satisfactory ID. I no longer have the moth.

New for the Colwall garden

Very pleased to get the first Oak Nycteoline for the garden last night, plus my first ever Large Wainscot - somewhat battered - on 2nd.  Phyl King

What is the collective noun for a group of Feathered Thorns?

A friend of mine termed Novemnals as an aggregated name of November and Autumnal. Seems to describe them perfectly. 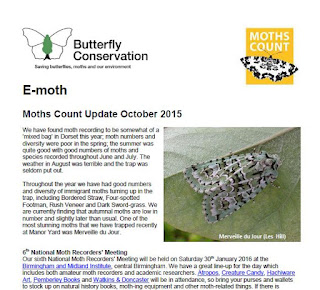 The latest "Emoth" newsletter is available from the National Moth Recording Scheme, via Zoe Randle at Butterfly Conservation.

Zoe says:
"Here is the latest edition of E-moth, it contains the usual update on the National Moth Recording Scheme, the programme for the National Moth Recorders’ Meeting on Saturday 30th January 2016, feedback about Moth Night 2015 and some other interesting snippets. Please feel free to pass E-moth onto others or include parts of it in your own newsletters, websites etc."

Click on the image to read the newsletter
Posted by Peter Hall at 11:15 No comments: