Following the discovery of a Clifden Nonpareil larva at Uffmoor Wood in July, Mike Williams suggested we ought to run some light traps in the wood to check for adults and so four of us convened there last Tuesday night.

We were joined by Beverley Challinor, who found the larva, the first confirmed breeding record for the species in Worcestershire, and were rewarded with the arrival of a ‘Big Blue’ mid evening. It was quite a sight to see this large moth in flight, illuminated by the MV light as it came closer and closer before settling in vegetation outside the trap. A pristine specimen, suggesting it had probably emerged in Uffmoor Wood from previous breeding. 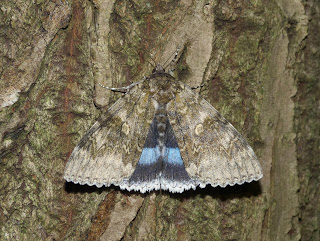 Posted by Patrick Clement at 09:36