To take advantage of the warm spell I put out 2 traps in the garden on 5th September and had 527 moths of 64 species including first for the year Rosy Rustic and Lunar Underwing but the count was dominated by the (expected) 121 Large Yellow Underwings and the unprecedented 121 (coincidentally) Brimstone. I have seen large numbers of Brimstones in the previous few weeks but only in the 60s. Also large numbers of Blastobasis adustella (45) and Square Spot Rustic (50).

A new for garden was the not very common Nephopterix angustella. A bit battered and worn but it is quite distinctive. Also nice to see Pinion-streaked Snout

On the evening of the 6th the forecast was again warm but I decided just to put the one trap out.

Result was less species 54 but more moths 546 as the LYUs had increased to 206. However there were still 85 Brimstone and 41 Centre Barred Sallow and again 50 Square Spot Rustic. I am going to give myself and the moths a rest for the next few days.

Of note amongst the usual suspects were the strange looking Wax Moth ,  my second ever Meal Moth and the first Sallow of the year. 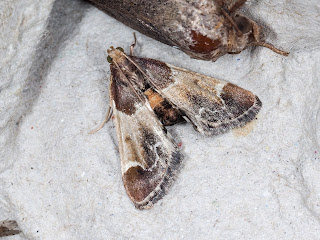