With the current spell of good weather I've been out looking for mines in the needles of Scots Pine on the Lickey Hills in Worcestershire and at Highgate Common in South Staffs.

The first photograph shows the mine of Exoteleia dodecella with the larva visible within. This mine is easily identified because, unlike the other Scots Pine leaf miners, the mine contains no frass, being ejected through the hole at the base of the mine.


I have found several mines which are either Cedestis subfasciella or Ocnerostoma friesei but I can't make up my mind which. However, the image below shows the mature larva of C. subfasciella which has left the mine and appears to be starting to pupate on the exterior of the mined needle. 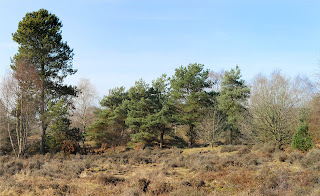