In the last few week moths have been a useful distraction from the global and national state of affairs providing at times some quantity as well as quality to my small patch of land.

Macros like Scarce Silver Lines, Bordered Beauty, Oak, Barred and Pebble Hooktips, Great Oak Beauty and 5 species of Thorn have been joined up here for the first time by Four-spotted Footman, Oak Eggar and Sharp-angled Carpet. On 25th July I had a moment of panic when this honorary macro appeared. I had no mental search image for the dark morph of Box-tree Moth with its purple iridescence. 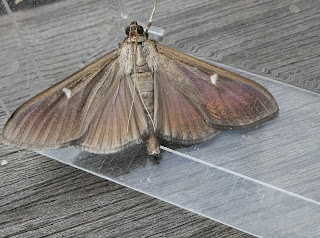 Amongst the many micros were Acompsia schmidtiellus and A cinerella arriving on cue in the last week of July. Migrant Diamond-back Moth and Rush Veneer were around most nights the light trap was out.
Also (subject to confirmation by PH)  were Ancyclis achatana and Aethes francillana and several other new ones awaiting a frozen trip to Scotland. 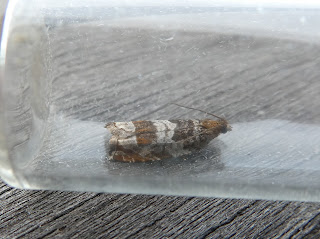 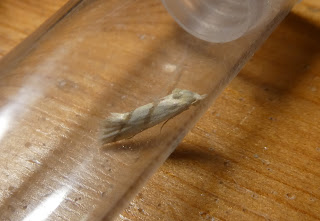 On my land a Field Scabious plant had a Nemophora metallica sitting on the same flower for at least three days at the end of July! It was pleasing to re-confirm its presence on the Doward. 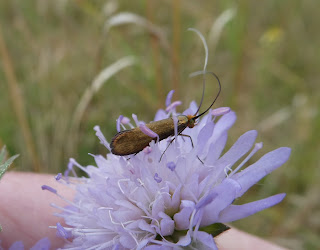 The last day of July also surprised me with a Six-belted Clearwing flying into my porch and offering itself for biological recording. Who needs pheromone lures! 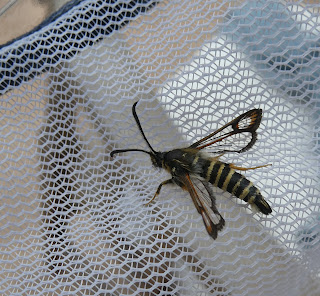