It's that time of year again when I'm busy identifying all the tiddly brown jobs collected during trapping sessions. A couple of days ago I was amazed to discover I had Platytes alpinella (July 4th from the garden), which is a county first.  No record in Worcesterhsire and a single fairly recent record for Shropshire.  However it seems a long way from its usual haunts, which is coastal and mostly in the South Eastern area.  I don't often upload dissections, but thought I would in this instance.  The image is now also uploaded onto the Moth Dissection website: https://mothdissection.co.uk/species.php?Tx=Platytes_alpinella Peter Hall 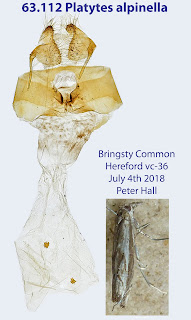